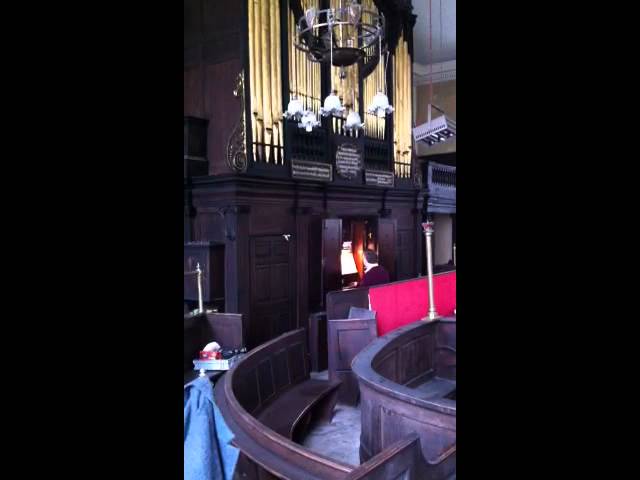 St. Werburgh’s church, Dublin has been on its current site for almost 1000 years. The present church dates from the early 18th century and contained an organ that was played by Handel. A fire badly damaged the church in the 1750s and a new organ supplied by Henry Millar of Dublin, though probably built by Ferdinand Weber, in a case by one John Smyth was installed in 1767. This instrument was heavily rebuilt by Telford and Telford of Dublin in the mid-19th century, although several registers remain from the 18th century organ, including the Stopped Diapason and Flute 4′ on the Great organ. The Swell organ is unusual in that it follows a practice sometimes employed by Telfords of providing an Oboe at 8′ pitch and a Clarion 4′ as the two Swell reeds. The organ in Castleknock College, Dublin, also has this feature. In Werburgh’s, the Clarion has been transposed an octave to become a tenor C Trumpet, quite telling in this lovely piece by William Boyce, celebrated blind organist of London’s Temple Church, which is contemporaneous with the Miller organ. The church itself is hugely historic, being both the burial place of Irish patriot, Lord Edward Fitzgerald and the baptismal site of composer and inventor of the Nocturne musical form, John Field. Enjoy!